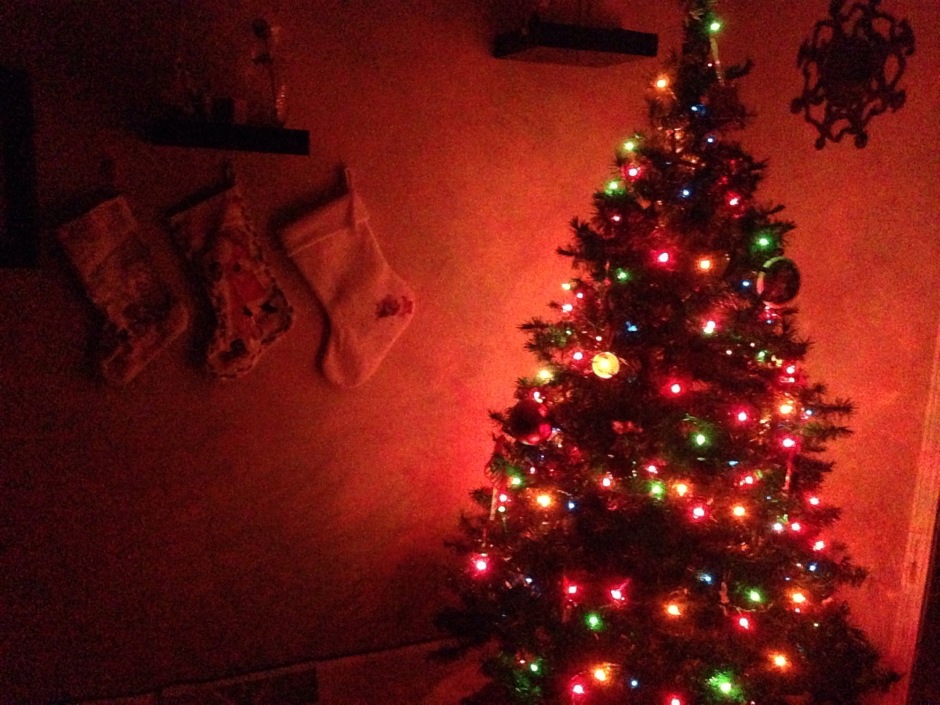 We put up our Christmas tree last night.

I’ve always preferred real trees. Other than the fact that they look better, I’m not really sure why I like them so much better than fake trees.

I remember the first time my mom suggested we use my grandma’s old fake tree instead of getting a real one. I was in high school. My mom said she wouldn’t be buying a tree that year and if we (me and my siblings) really wanted one we would have to go get one ourselves.

I’m sure when she said we would have to get one ourselves she meant we should go to the tree farm. But we lived in the country on 10 acres, so my sister and I decided we would just go out into the backyard and cut down a tree. 6 hours later, my sister and I had cut down a 10 foot tree with a hand saw, drug it into the side yard, cut off the top 6 feet, and brought it inside.

This is just to show how far I am willing to go for a real tree.

My husband is on the other end of the spectrum.

He thinks paying $10, or whatever it is, each year for a tree that’s going to wither away to nothing in a month and leave needles everywhere in the house for the next year is a waste of money. (He also grew up with a fake tree – he felt that part was needed to make his case.) He obviously doesn’t appreciate nature as much as I do!

I remember we had the great debate our first Christmas: real tree or fake tree. When there are only two people coming to a vote (like newlyweds) and they can’t agree, there will always be a compromise – or a stalemate, I guess. I used to hate compromise. I still don’t like it, but I realize it’s necessary, and the peace that comes after a compromise is usually worth it.

Anyway, there we were, both of us arguing a strong case for our preferred tree and neither of us budging. Black Friday was coming up, and I came up with what I thought was an ironclad plan. I told my husband that I would get a fake tree on one condition – if we found one being sold on black Friday that met every single one of my criteria:

So, when the black Friday ads came, we began scouring them for deals on items we had been needing for our home.

And then…right in front of my eyes. That dang Kmart ad!!!

The Lord had humbled me once again. This time in a simple way, but humbled nonetheless. I guess He was telling me don’t try to secretly compromise in hopes that I will trick the other person into compromise.

So early Friday morning, I went to Kmart and spitefully bought that tree and a string of lights. Everyone else in line had TVs or movies or games. I had a fake tree.

Every year I am reminded of that day, and I laugh a little to myself and hope that it won’t survive until next year as I piece its fake limbs together.

Because that will be the year I get my real tree. 🙂