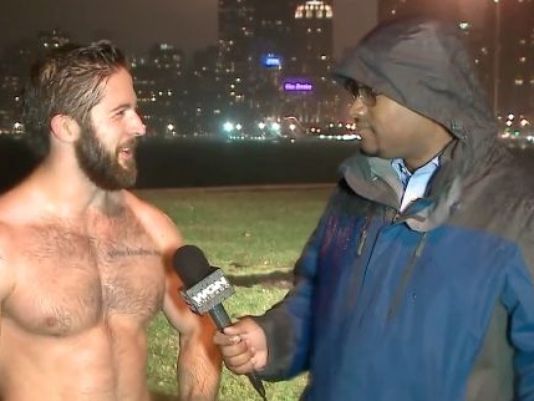 My Facebook feed has been flooded with images of this guy, from people sharing it to news anchors covering the story – the story of a guy who went viral overnight…for being shirtless while running.

At the end of the video where he first appeared, he declared to all the world that he was single, and that’s fine. I want to talk about what happened from there.

Out of sheer curiosity I decided to look in the comments section on the same page where the video appeared. Maybe I shouldn’t have been, but I was shocked at the vulgarity that was strewn across my screen as women (and men) from all over the country (and probably world considering there were over 3 MILLION views of this thing the first day) responded to what they saw.

In a later video, Ethan told a news anchor that he was a Christian, and I am so glad he used that opportunity to talk about Jesus rather than basking in all of this attention.

The thing that bugs me, though, is that it appears I am the only one who sees a problem with what’s going on, or maybe what’s not going on.

Were it a woman in this video, you can be sure all sorts of insults would be thrown at her. Yes, there probably would be plenty of vulgar offers to remove her singleness, too, but I think the biggest adversaries she would face would be other believers. Her proclamation of faith would have been quickly followed by accusations of terrible immodesty. And that’s not okay!

I have yet to see anyone say, “that guy should put a shirt on!” In fact I have seen quite the opposite. Several men who I know to be believers have praised him and said, “keep running with your shirt off, man!”

I am not going to say he needs to put a shirt on; it would be pretty hypocritical of me considering I don a bikini on the beach. If he wants to run shirtless, that’s great. If the Lord convicts him of being immodest, then I would hope he would put on more clothes, but it isn’t my job to convict his spirit.

I do, however, feel it is my job to hold accountable my brothers and sisters in Christ of the double standard we have towards the issue of modesty.

I am not saying modesty is bad. It is biblical, after all. I am saying that we can’t shame a woman for wearing a bikini and praise the body of the shirtless man playing volleyball on the same beach.

I am tired of people trying to say that lust is a man’s problem and that men are visual creatures. According to the thousands of comments in response to Mr. Shirtless Running Man, MEN AREN’T THE ONLY ONES WITH EYES!!!

And we all know that, really. It’s evident when women swoon over Channing Tatum, Tom Hardy, and the like.

But people, Christians especially, seem to think that putting a bandaid over a severed artery makes the problem disappear.

Asking every woman (and man) to put more clothes on will not make the lust in your heart disappear.

When we focus on what’s in front of us – half dressed people – the enemy wins. Because our focus is away from the only One who can really fix what’s going on.

Our flesh naturally desires pleasure in all forms. To deny ourselves pleasure is to deny our nature, but that is exactly what Christians are called to.

We can direct our desire toward any number of things, but when we direct it toward sexual pleasure lust can arise. It manifests in objectification of people, pornography use and addiction, and sex addiction.

We need to shift the focus. Rather than pointing fingers and trying to change the things in front of your face, turn inward. Direct your attention to Jesus, and ask Him to change your heart. We can’t change what the people around us are doing. We don’t get to make their choices, but we do have the power to resist temptation. I’ve found it is when I am pursuing the Lord the most, that I struggle with lust the least.

We do not need to live in fear of sin because Jesus has paid for it all, so go boldly into the world  and let people see Jesus in you.

The Lord has not called us to live a sheltered life away from temptation, but He has equipped us with everything we need to be victorious in the Holy Spirit.

Galatians 5:16 “So I say, walk by the Spirit, and you will not gratify the desires of the flesh.”

One thought on “Ethan Renoe and Desire”